[This is a long post with my experience in riding the Leadville 100 mountain bike race. If you want to just look at pretty pictures instead, go here.] 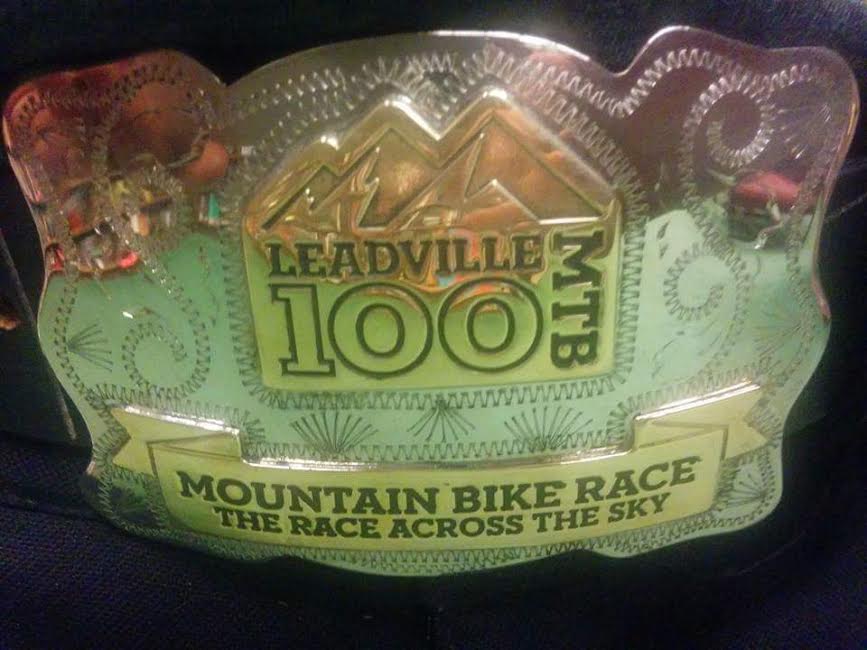 I finished the Leadville 100 mountain bike race last Saturday in 11 hours and 23 minutes (Strava track), beating the 12 hour cutoff time and earning myself a sweet belt buckle. It was hard. It was really hard. But I pushed through the pain and exhaustion to finish, and it was incredibly satisfying.

It was also great to be part of the World Bicycle Relief team, raising money for a great cause. Thanks to all of you who donated – between your donations, my matching, and the eventual corporate matching from Google, we will have supplied nearly 80 bikes to those in need in Africa, including students, doctors and entrepreneurs.

But let’s reset – what is the Leadville 100? I first heard about Leadville from Fat Cyclist, a bike blogger, who has raced it every year since nearly the beginning (this was his 19th start of the 22 times it has been run). But he just described what it was like to ride Leadville – I didn’t learn about the race’s origins until this past week.

Ken Chlouber was a shift leader at the Climax Mine in Leadville when it was shut down in the early 80s. Looking for a way to keep Leadville from economic collapse (basically the entire town was employed by the mine), and as an avid marathoner, he wondered about starting a race as a way to bring in tourism dollars. While talking to a consultant about his idea, the consultant said that to make money from tourism, the tourists had to stay overnight. So Ken thought to himself, “If it’s a 100 mile race, they’ll have to stay overnight!” and thus the Leadville Trail 100 Run was born. Yes, I said run. The 100 mile foot race came first, in 1983 – the mountain bike race wasn’t added until ten years later in 1993. The Leadville races were little known until two things brought them into the public eye: the Born to Run book which talked about the Leadville 100 trail run, and the Race Across the Sky documentary, filming the attempt of Lance Armstrong to win the 2009 mountain bike race. Now, thousands of people descend on Leadville each year for these events, and it is what Leadville is known for.

When I first read Fatty’s stories of riding the Leadville 100, it sounded mythically hard, but I also had this itch to find out if I could do it (similar to doing the Death Ride this year) after my year of biking last year. I applied for the lottery, but didn’t get in. And I was somewhat relieved because I wasn’t sure I could finish the race. But then Fatty announced that he was looking for people to raise money for World Bicycle Relief, and if they agreed to raise $5,000, they’d get an entry into Leadville. So I applied for his WBR team, and was accepted. And so it began…

If I thought I was all into biking last year, it was nothing compared to the training I did this year for the Death Ride/Leadville 100 combo. As I mentioned in my Death Ride post, I had ridden more miles and climbed more hills in the first 6 months of 2015 than I did in all of 2014. Training for the Death Ride had gotten me the legs and lungs I needed to finish Leadville, but riding on pavement is easier than riding on dirt and trails. And I had only 5 weeks to adapt.

The first step was riding the Tahoe Trail 100k, a Leadville qualifier, a week after the Death Ride. Run by the Leadville team, it was conveniently located, and gave me an idea of what to expect, but was shorter and easier than Leadville (only 62 miles, lower altitude, less climbing). I pushed hard in that race, and was able to finish in just less than 7 hours, which was a solid qualifying time for Leadville, even if it put me in the bottom 20% of finishers.

Then I had exactly 4 weeks to get ready for Leadville itself – in addition to the course, I had to get ready for the altitude – Leadville is at 10,200 feet, and the course goes up to 12,500. I rode my mountain bike when I could get to the trails, and also climbed hills on my trusty Surly Long Haul Trucker loaded with baggage to simulate the extra effort it would take to climb at altitude, including doing a steep 5 mile, 2000 foot climb while biking back from a camping weekend, loaded with all of my gear.

Finally, the week of the race arrived – I flew out to Leadville on Sunday, since it takes me a few days to adapt to high altitude. I also wanted to be there to do the pre-ride clinics with Fatty and four-time-winner Rebecca Rusch – each day they were riding different sections of the course, and getting to know the course and what to expect was super helpful. It also gave me confidence that I could do these climbs I’d only read about (Columbine, Powerline, etc).

So let’s talk about the race itself. It’s a 103 mile out and back course as you can see from my Strava track. There are 5 major climbs – outbound, it is St. Kevins, Sugarloaf and Columbine, and inbound it is Powerline and Carter. The rest of the course isn’t flat, but not nearly as much effort as those 5. We’ll take the course (and my race experience) in order:

After the race, I was completely exhausted. I just lay on my bed staring at the ceiling, unable to form coherent thoughts or focus on anything. I had gone all out for over 11 hours, with no easing up. Even at the Death Ride, I had taken breaks at the aid stations, and I could kind of zone out on the climbing and on the flats because they were on pavement. At Leadville, I was going all out the whole race because I had to push hard on the flats to get my average speed up, had to pay attention on the descents to not crash, and had to work hard on the climbs because of the altitude. I even had super-efficient aid stops, thanks to my friend Jess crewing for me (I spent about 5 minutes in the aid stops the entire day – of my total stoppage time of 40 minutes, 20 was because of the flat, and the rest was when I needed breaks during or after climbs).

It was quite an experience. I’m glad I did it. I’m also glad it’s done. It was by far the hardest physical feat I have ever done. To put it in perspective, I did a week-long mountain bike tour from Durango to Moab last year that covered 220 miles and 23,000 feet of climbing over 7 days. And I thought that was really hard at the time. Leadville is half of that week’s riding in one day. One of the Leadville mottos that Ken repeats is “You can do more than you think you can!” A year ago, I didn’t think I could ever finish Leadville in 12 hours. And now I have.

But even after all my training, I just barely beat the 12 hour cut-off for finishing. I have no chance at a sub-9 hour finish to earn the big gold belt buckle, so there’s no temptation to come back for that so I don’t think I’ll be back next year. I’ll find something else to do. Maybe even return to blogging! 🙂

5 thoughts on “The Leadville experience”

Three Poisons on Too Many Trees Newsletter toomanytrees.substack.com/p/three-poison…