Given my last post was about charity, I thought it was appropriate to follow up with my long overdue review of Amanda Palmer’s book The Art of Asking. The book is an amplification of Palmer’s TED talk with the same title, discussing the connection between an artist and her fans. But it’s also a chance to curl up and spend some time with Amanda telling stories from throughout her life, from her music career to her courtship with Neil Gaiman to the remarkable ways in which she connects with her fans. 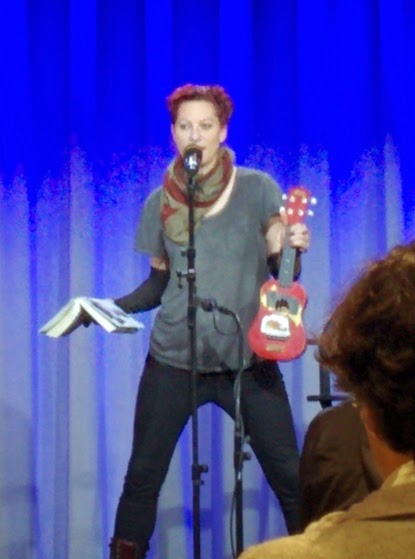 For those that don’t know of her, Amanda Palmer is a woman that defies description in many ways. She is known primarily for being a musician (she recently created the Amandalanda webpage to direct people who only know her through the TED talk and her book to learn about her music) (the picture at the right is when she spoke at Google and was asking the audience whether they’d rather hear a song or a reading), but she is so much more – I consider her a force of nature. She is unapologetically who she is, and she is fighting hard every day to make the world bend to her, rather than the other way around. She fought to get control of her music back from the label she originally signed with, she makes her music (and associated videos) according to her vision, and I think it’s interesting how she is experimenting with new ways for us fans to fund artists, from pay-what-you-want to her record-setting Kickstarter.

The central question the book addresses is why is it so hard for us to ask for help? One of the stories she tells over the course of the book is how difficult it was for her to ask for a loan from her husband, Neil Gaiman, even though he could afford it and wanted to help. And this is from a woman who has been supported by her fans all the way back to her days as a living statue in Harvard Square. But she couldn’t bring herself to ask her husband for help because of all sorts of voices in her head saying that it wasn’t right, that she was an independent woman, that she would find her own way, etc. Many of us have this narrative going in our head that asking for help is equivalent to giving up – it’s an admission of weakness, and a permanent stain on our character.

One of the passages she chose to read at Google was about discussing with another musician about whether they “deserved” the money that their fans were giving to them. And she related it back to Thoreau, whose story of Walden is well known as a story of living with nature in solitary self-reliance. Except that, according to Amanda, Thoreau was not in solitude at all. In fact, his mother and sister stopped by once a week to deliver fresh baked goods, including doughnuts. Amanda’s point is that we can all aspire to self-reliance, but when somebody wants to give you doughnuts, take the fucking doughnuts. In other words, don’t turn down help because you don’t feel like you deserve it – if somebody wants to help you, that’s their choice, and you should accept it gratefully and gracefully.

But it’s hard. There are cultural norms against getting help, especially in America, going back to the Protestant work ethic. It’s a little funny, considering that the Puritans wouldn’t have survived the winter without the help of Squanto and the Indians, which we celebrate each year at Thanksgiving – in that sense, you’d think that getting undeserved help would be literally as American as apple pie. But that’s not the case, as evidenced by the continued culture wars against welfare and food stamps – there is a strong feeling that people should have to “earn” money rather than being given it (a topic I’ve struggled with myself).

We have a similarly complicated relationship with artists in that some people feel that artists don’t “deserve” money because they should enjoy making art for its own sake. Money should only be “earned” by doing unpleasant “work”, which is why some people also take umbrage at athletes getting paid millions of dollars to play a “kid’s game”. I think such people are missing the tautological capitalistic assumption that that people are “worth” whatever others choose to pay them. In part, they don’t like that assumption because it forces them to confront what we actually value – if athletes are millionaires and teachers are not, then we as a society value athletes much more. This makes such people uncomfortable, forcing them to say that the athletes don’t “deserve” the money – that the money is not representing true societal value.

These are difficult questions to grapple with – Amanda refers to the voices in her head that she calls the Fraud Police, asking her “Do you really deserve this? Did you earn it?” and telling her to “Get a job!” And we all have those voices, which is why asking for help is so hard. And yet, asking for help is also an opportunity to connect in a real way with other humans. We all deserve help, so it is okay to ask for it. In fact, it is a gift to others.

In a coaching class I took a few years ago, the facilitator asked at the beginning of the class, “How many of you like to help other people?” Everybody raised their hand; after all, why would we be taking a coaching class if we didn’t want to help others? Then she asked, “How many of you like asking for help?” Nobody raised their hand. And she waited for us to make the obvious connection that none of us can get the desirable experience of helping others if none of us ask for help.

Palmer mentions Lewis Hyde’s book The Gift (my terrible review of this excellent book) which traces out the gift economy and the idea that gifts must continue to circulate. By giving more, you will get given more. But if you hoard a gift, the value disappears. I think that’s the attitude we have to have about asking for help – it is an ongoing network. You pay it forward and have no idea of how you will get paid back, and yet having that generous attitude will ensure that you do.

I loved reading The Art of Asking, and highly recommend it. Amanda Palmer does a great job of telling wrenchingly personal stories while weaving in these larger questions that many of us grapple with.

One thought on “The Art of Asking, by Amanda Palmer”

Fascinating reflection that the aesthetic of quiet and "inside voices" is used to police other classes and races from expressing joy. I was also reminded of the upstairs/downstairs aesthetic of Downton Abbey. twitter.com/TheAtlantic/st…

If gentrification has a sound, it’s silence. @XochitltheG on why the rich love quiet so much, and what it means for everyone else:https://t.co/YPO55svVeY