Singing with the San Francisco Symphony Chorus has given me the opportunity to do some interesting things. One such experience was my first appearance on national television, singing in a backup choir to the teen phenom, Charlotte Church.

How did this happen? Well, Charlotte Church is a 14-year-old Welsh soprano, who's apparently immensely popular. Her first album, Voice of an Angel, went platinum, and she's been featured on many shows - my sister saw her on the Today show, for instance. Ford Motor Company, in an attempt to create an environment-friendly image for itself, decided to sponsor a benefit concert of Charlotte Church, called Heroes for the Planet.

This concert was recorded in San Francisco's Masonic Auditorium. Two of Charlotte's songs needed a backup chorus. Where does one go in San Francisco to get singers? Apparently, the San Francisco Symphony Chorus. So, at one rehearsal, we were told they needed about 30 singers to do this gig. I volunteered and was selected.

The songs themselves were pretty silly. We learned them in about 10 minutes. But then we spent about 2 hours refining them, because, hey, it was TV so we figured we should polish them as much as possible. We had a second rehearsal at the auditorium, which consisted of a couple quick run-throughs, learning how they wanted us to get on and off the stage, and sitting around a lot.

The morning of the concert, there was a dress rehearsal. We were told to be there by 10 am because we might be needed on stage as soon as 10:15. So we showed up at 10. I think we got on stage at about 1:30pm. Things got pretty silly after three and a half hours of confinement in our dressing room; we couldn't leave because they kept on saying "We'll need you in 15 more minutes. Don't go anywhere!"

Eventually we got on, did a couple more run-throughs, and were out of there in about 45 minutes. Wandered off to the catered lunch, and hung out until the concert itself.

I have to stop here to note how incredibly over-the-top this concert was. The stage was done up in gilt, and star-shaped bursts appearing to emanate from the stage jutted out into the seats. There were two 20-foot video screens on both sides of the stage so that audience members could get a close-up of their beloved Charlotte. I counted nine cameras around the auditorium, including one on a 30-foot boom, which swooped excitingly around, and another on a 50-foot track which was suspended from the ceiling. Haley Joel Osment, the child actor from The Sixth Sense, MC'd the whole affair. It was pretty crazy.

Our part of the concert went fine. It was aired on May 20, 2000, as "Heroes for the Planet", on the A&E cable channel. You can see some screenshots of me scanned in by my parents on this page. All in all, it was a fun experience.

A shot of me in the same frame with Charlotte herself. I'm blurry and out-of-focus, but in the top right of this frame. Check out the hideous gold paisley vests we were given to wear. With matching bow-ties, no less. 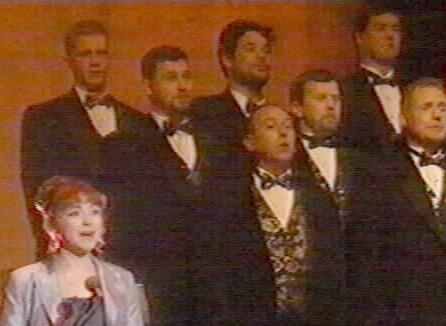 Other shots of us singing. 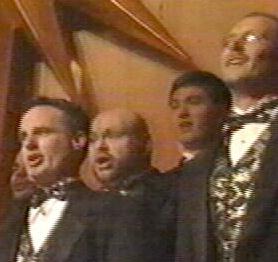 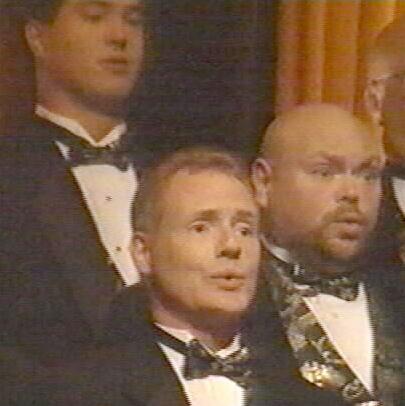 Back to Eric's chorus page